The history of Renault

The Renault Company has its starts in the 1898 with Louis Renault driving his first “Voiturette”, It was the start of great vision, development and new technological findings.

In the same year, the three Renault Brothers (Louis, Marcel and Ferdinand), created the official company by its name:  Société Renault Frères. Louis was working on design within the company. With the first win of a motorsport race, the Renault’s orders increased in that year to an extraordinary 71 cars.

In 1902 the Renault developed and build the companies first engine with two cylinders.

In 1914, when the war was raging in Europe, the Renault was called up to help with the efforts of war. “Taxis of the Marne” were the Renault taxis that transported about 4000 men to the front.

In 1924 the new logo (diamond shape) is adopted by the company.  In 1929 the factory from Boulogne-BIilancourt was opened and the production of the famous 8 cylinders Reinastella engine started. 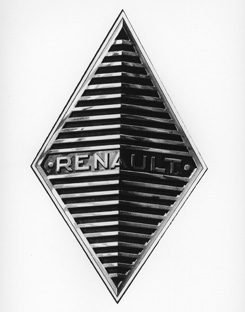 In 1945 the Société Anonyme des Usines Renault, become the Renault Company fully owned by the French Government due to the nationalization of the company.

In 1946 was launched the famous 4CV with it’s rear-engine positioning and in 1956 the Renault Etoile Filante with an extraordinary engine of 270 HP turbine engine set up four speed records.

In 1956 The Dauphine was the successor of the 4CV and had cutting-edge technologies and accessories for its time, such as; automatic gearbox, adjustable seats or heating.

In 1959 the Renault start producing the Estafette the companies first front wheel vehicle.

In 1961 the emblematic Renault 4 was introduced to the market. It came up as a simple but robust car that everybody loved. Was produced in more than 8 million pieces and exported to over 100 countries.

The Renault 5 came up in 1972; the first mini of the company, while targeting women was a car city with three doors. Small, easy to drive and perfect for crowded cities was built in over 5 million pieces.

The RS01 car, introduced in 1977, was the Renault’s first Turbo Engine for the Formula 1.

The Renault Espace in 1984, the first family car, and the Twingo in 1992, comes up as the true city car revolution.

In 1996 the company became private and in 1998 the Renault’s Technocentre was built in Guyancourt, France.

In 1999 Renault creates an alliance with Nissan and becomes takes over the Romanian brand of Dacia.

In 2008 the French company buys 25% of the shares of AVTOVAZ, the Russian vehicle maker, creator of Lada.

The TreZor concept, revealed in 2016, shows the Renault’s vision on the future.