The History of Fiat Automobiles

The Fiat was established in 1899 when the Società Anonima Fabbrica Italiana di Automobili Torino – F.I.A.T. is born.

In 1900 the first factory is build and 24 cars are being built yearly. The first car to be build was the 4 HP model.

In 1903 the Fiat Company gets listed on the stock and the vehicles developed and built here are sold as goods.

In 1906 the export of the Italian Cars Company is overwhelming the sales in the country (6 out of 8 million lire in sales from export). New Models are introduced, such as: 8 HP, 10 HP, 12 HP, 24 HP, 60 HP, 100 HP and the more powerful 130 HP. In the same time the company extends in building marine engines, trucks or trams.

Between 1915 and 1917, the biggest factory in Europe is developed – the Lingotto Factory.

In the ‘20s the company produces a wide range new models including SuperFiat a luxury model or the 1014 van with six wheels and dual transmission – a really good off road vehicle.

In the 30’s the company begins massive exports to Spain, USSR and Poland.

In the early ‘40s the Italian Fiat vehicle company expands its production for military purposes and concentrates especially on development and producing of trucks.

In 1952 the 8V sports car reaches 200 kilometers per hour – staggering speed for the times. 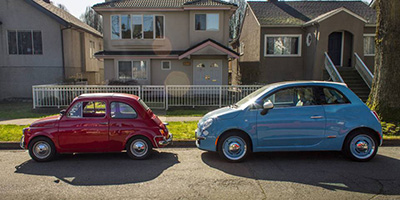 In 70’s the Fiat expands its factories and introduces new brands such as Iveco, Lancia or Ferrari.

In 1984 Alfa Romeo becomes part of the Fiat Group.

In 1990 the first mass production starts for the electric powered vehicle Panda Elletra.

In 1998 new models are introduced such as Fiat Multipla or the new Fiat Punto.

In 2001 Fiat introduces Stilo model and in 2005 it introduces the 16v 1.3 MultiJet engine which wins the engine of the year.