The Seat Ateca comes with 4 engine types, 2 for petrol and 2 for diesel. 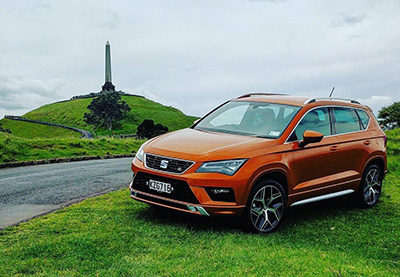 The Seat Ateca has rather big body for its C Class and big capacities. The trunk has a volume of 615 liters and a loading capacity of 533 kg.

This compact car has a good top speed no matter what engine it has. Starting with the smaller 1.0 engine it can reach up to 183 km/h where the diesel 2.0 engine can go up to 202 km/h.

Great Technologies on board

The engineers and developers from Seat created a series of interesting and cutting edge technologies implemented in this car. Probably the most useful and interesting one is the Wireless Charging Station. Another cool feature available is the 360 degrees camera that helps with parking. Due to its increased customization features, the car will probably be your “new best friend”.

Using new technologies the Seat Ateca is a proud exclusive member of 5 stars at the NCAP Tests.  The car is robust and brings special attention for safety. It is creating keeping in mind children safety, pedestrians protection and of course, adult protection. Features like the Traffic Jam Assist, which sends warnings helping to prevent accidents or the dead angle spotter makes it even better.

All in all, the Seat Ateca is a safe car with good engines, big utility volumes and is filled with technology.