Electric cars! They have begun to enter the model inventory of many brands. The dramatic reduction of fossil fuel reserves and the increasing pollution rate have led the world to seek an alternative energy source. As a result of this event, the electric car riffle that started with Hybrid cars in the automotive sector seems to have reached the level to produce fully electric cars. The low emission rates they have, the clean energy they use and the power potential they promise have made them very remarkable in the market. The Tesla company, owned by Elon Musk, launched the first examples of these vehicles. Tesla hegemony started to activate the market by mobilizing some companies nowadays. Although many brands are working on various projects, the biggest surprise came from Porsche. Porsche, which plans to become a strong rival against Tesla with its Taycan model, aims to have a say in the field of electric cars. Now let's take a closer look at Porsche Taycan, which is preparing to bring a new breath to the market! 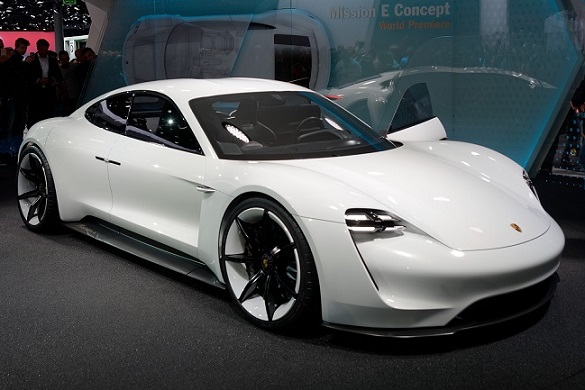 Just five years ago, we have seen the traces of Taycan at the 2015 Frankfurt Motor Show. The concept car, which was unveiled under the name of "Mission E Concept" by Porsche at the fair that year, managed to attract the attention of all participants with its futuristic design. After four years, Porsche had a big surprise at the 2019 Frankfurt Motor Show. Mission E concept was in front of us in a bloody alive four years later under the name of Taycan. The name Taycan may sound familiar somewhere. Because this word is Turkish! The word Taycan, which means young horse, has been found suitable as a name for the model. It is a reference to the horse figure in the middle part of Porsche's logo. With the introduction of the production model, Porsche presented a fully electric car model to be made public for the first time in its history. The model has expected to be developed by launching Taycan with a variety of technical and aesthetic equipment, not depending on a single variation. The finalized variations include Taycan 4S, Taycan Turbo, and Taycan Turbo S. 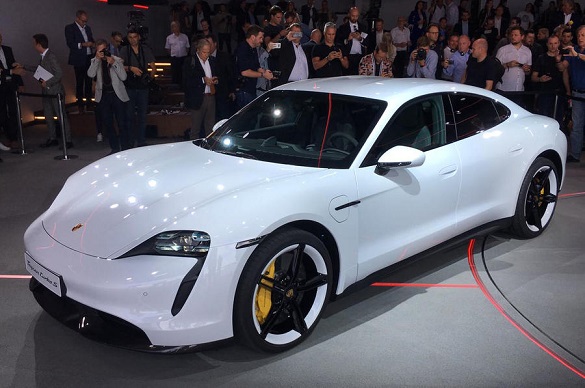 In terms of car design features, it bears resemblance to the Mission E Concept at many points and reflects Porsche's quality to the fullest. Michael Mauer and Mitja Borkert, working on the design of the car, seem to have done a pretty good job of design. When focusing on the general design, the first detail that draws attention is the air ducts. Air ducts are strategically placed on the front. Thus, friction is minimized bypassing the airflow efficiently over the tires. Unlike the usual Porsche design with this move, some changes were made in the front. However, Taycan has become an extremely modern and streamlined vehicle. In addition, instead of the oval headlight design that we are accustomed to seeing in the Porsche brand, the choice of a four-point Matrix LED is a very aesthetic and attractive decision. This detail, which increases the visibility of the driver, is very important in terms of safety as well as aesthetics. Another detail that draws attention in the body design is the door handle technology that we are accustomed to seeing especially in Tesla and Jaguar brand vehicles in recent years. Door handles that fold in when parked or while driving open outwards if needed. Thus, the amount of friction on the vehicle is reduced by preserving the smooth body design of Taycan. Finally, when we look at the rear of the car, we see the one-piece taillight design, which has become the signature of the Porsche brand for years, in a modernized state. In recent years, this taillight design has been combined with today's technology and started to be used frequently in new generation Porsche models. To evaluate the design in general, Taycan has a very compact and beautiful design. 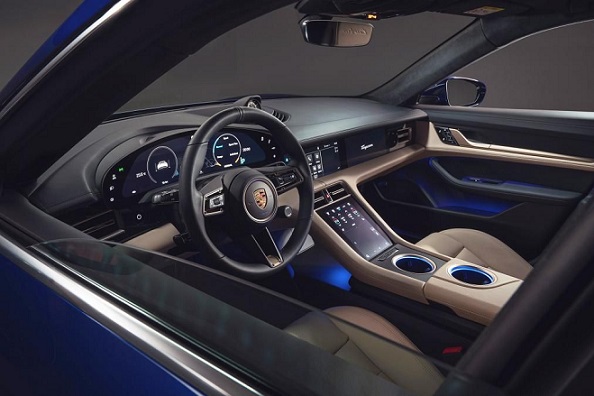 When you enter Porsche Taycan, you can think of yourself in the space shuttle. Because when Porsche designed this vehicle, they benefited from all the blessings of technology. Perhaps the most remarkable detail in the cockpit is that there are no keys. Yes, you have not heard wrong! Almost every key on the consoles has been replaced by the digital version. Therefore, it is almost impossible to find an old-style analog control mechanism inside the vehicle. The creation of the design in this way provides a very regular cabinet configuration. Porsche chose to use a 16.8-inch customizable digital display on the driver side, creating a fully digital console layout for the first time on a Porsche model. In addition, a 10.9-inch touch screen was mounted on the passenger's right side of the driver, allowing the passenger to comfortably dominate the multimedia system while traveling. In the center console, an 8.4-inch vertical digital screen allows effective control of all functions. It is possible to access the PCM (Porsche Communication Management) system from almost all of these screens. You can also access all the dynamics of the car. Despite all this technology, it is possible to see the classic manual Porsche watch at the top as an aesthetic detail of the design. In addition to the details we have mentioned, the ambiance lighting, the quality material used in the console, seats and the ergonomic seat design makes Porsche Taycan an extremely comfortable and elegant car. 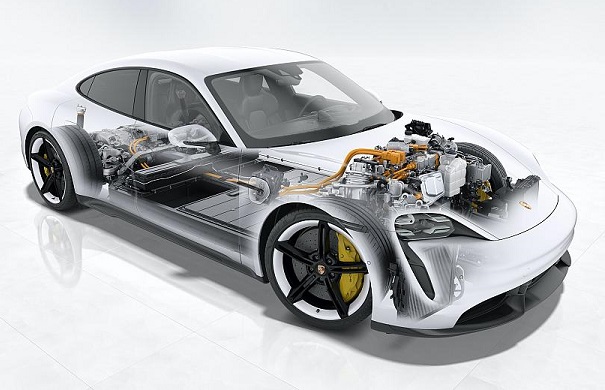 If we want to understand why the Taycan model has such a great potential for the industry, technical features are perhaps the most important point we should look at. This is because Porsche Taycan has revolutionary features in the electric car industry. First of all, it is useful to remind you that Porsche Taycan is a fully electric car. This means that no power source is used in any part of the car other than the electrical energy source. While Taycan gets its power from liquid-cooled Lithium-ion batteries, it makes a difference in the electric car industry and operates with a power of 800 volts. The most important reason for making a difference is that all of the electric cars on the market operate with 400 volts of power. With its battery capacity, it can cover 450 km without charging. At the same time, the batteries can store enough energy for a distance of 100 km within a short time of 5 minutes thanks to its fast charging feature. For full capacity charging, it needs an average of 22 minutes. Taycan, a car that will make a difference in its class in terms of performance, goes from 0 to 100 km in just 2.8 seconds. The one-of-a-kind two-speed electric engine system developed by Porsche is key to this performance. Thus, unlike other electric cars in the Taycan class, it is able to accelerate more than once without depleting its power. The automobile, which has the highest speed of 260 km, offers the desired performance with its light structure.

To sum up, Porsche seems to prove itself once again to the entire automotive world as a brand. This model they created seems to change not only the full electric car industry but also the perspective of all brands on the market. We hope that many cars like Porsche Taycan will take their place on the roads and help carry the automotive world to bright tomorrows.