EURO Emission standards and their meanings

The emission standards are important for environment and in this article we will explain their meanings and their values. 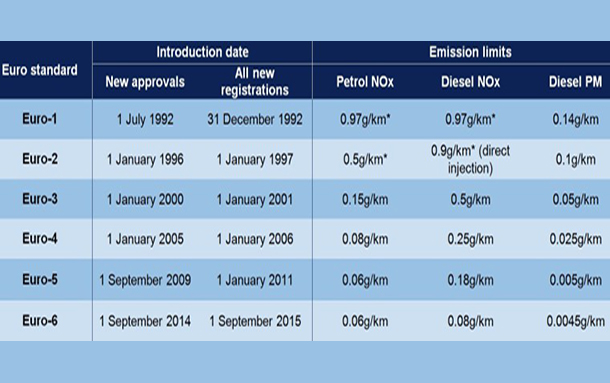 These limits refer to the level of NOx (nitrogen oxides) for Diesel or Petrol vehicles and a limit for Particulate Matter regarding diesel emissions. These limits are very important for a new vehicle since exceeding a limit for any of these levels would prevent a car to be registered.

Effectively introduced in 1993 the standard for a Diesel or Petrol car was of 0.97 g/km for NOx. As well, for the diesel versions, the PM level would be at a maximum of 0.14 g/km.

The standard for Euro 3 was introduced as of 1st of January 2000 and became mandatory 1 year later for all registrations. The new standard came with a level of 0.15g/km for gasoline and 0.5g/km for diesel. PM was 0.05 g/km.

Probably one of the most important standards in the industry was introduced on1st of September 2009 (mandatory – 2 years later). The Petrol nitrogen oxides are of 0.08 g/km and 0.25g/km for diesel. Diesel’s PM is of 0.025/km.

The current standard for cars in Europe was released in 1st of September 2014 and mandatory one year later. Same as Euro 6 the gasoline engines should not exceed 0.06 g/km with NOx for Diesel for 0.08 g/km and a PM of only 0.0045 g/km.

While the world and Europe struggles to reduce the vehicles emissions, new standards will be introduced and the future will probably bring low or zero emission vehicles.